21-year-old Anna Stratton’ relationship with her adoptive parents becomes estranged when she tries to trace her birth mother. Anna lives with her boyfriend Matt and dreams of becoming a proper journalist.

After a night out with her friend Zoe, Anna heads to Westminster Bridge, the place she last saw her birth mother.

On the same day, 260 years before, two scientists on Westminster Bridge, conduct trials on experimental time travelling equipment. A supernatural miscalculation causes an ‘alternative version’ of Anna to be transported back to Georgian London. 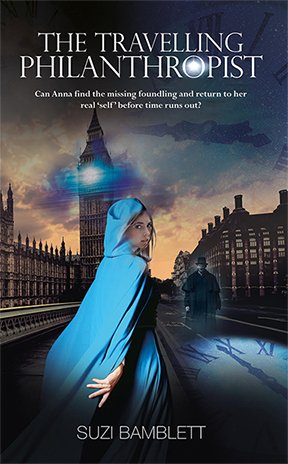 Unable to remember her previous existence, Anna is indebted to servant girl, Mercy, and offers to trace Mercy’s child who is missing from the Foundling Hospital. During her quest, Anna meets well-respected philanthropist, Janus Gregory, founder member of the Prism Society and responsible for the development of the time machine. Together they uncover an illicit trade in foundling children.

Meanwhile Anna in the parallel and contemporary world is trying to track down her birth mother. She becomes increasingly plagued by bouts of disassociation, fugues and paranoia.

It is not possible for Anna to survive indefinitely in both worlds and it becomes a race against time to find the missing child and return to her own world.

Her way was lit by the multi-coloured fairy lights of the restaurant boats as she ambled along the Embankment. Anna hadn’t even stopped to message Matt. Must be nearly midnight. He’ll wonder where I am.

Reaching the top of the steps to Westminster Bridge, she leaned against the balustrade. This is where she’d last seen her birth mother. Anna looked down at the angry black water. Someone could easily stand here undetected before dropping unnoticed into the churning waters below.

Feeling a jolt, she spun around to face a hooded figure jerking at her shoulder strap. The more rational part of her brain knew it was best to let go, but Anna wasn’t prepared to lose anything else. She clutched the bag to her, hanging on for dear life.

The mugger took a quick glance around, checking no-one was close, then snarled. ‘Let go bitch.’

For a moment they were both tugging, equally determined not to give in. She gasped as the mugger’s fist caught a glancing blow to her chin. Her grasp momentarily loosened, the attacker legged it towards the south side of the river.

She heard Big Ben strike midnight. Her legs began to shake as shock kicked in. Her body gave up the fight. As she sank, the back of her head collided with the carved stone balustrade.

Frederick Tweedie made minute adjustments to the equipment. Beside him, Thomas Pestlemore huffed and puffed.

‘Have patience, Sir,’ said Tweedie. ‘These things cannot be hurried.’ He tweaked the aperture by another miniscule amount to ensure the lens was pointing at the darkest space between the stars.

Pestlemore leaned in over his shoulder. ‘Perhaps a little higher, Tweedie?’

Tweedie glared at him. ‘Who is doing this, me or you? Who, Sir, is the astronomer here?’ He strutted forward, tapping his chest. ‘Oh yes, that would be me.’ He moved forward to make one final adjustment. ‘There, that should do it.’

‘Well done.’ Pestlemore clapped his skinny friend on the shoulder-blade.

Tweedie eyed him with contempt but Pestlemore’s enthusiasm could not be dampened. He hopped from one foot to the other. ‘Are we ready now for the Prism?’

Pestlemore bent down to lift the object reverently from its wooden case. As he held it aloft, light from the moon caught the crystal sides and a rainbow of colour cascaded far out across the rippling black Thames water.

Tweedie reached out to receive it. With meticulous care, he positioned it at the heart of the assembled equipment. ‘The moment of truth.’ There was a heavy clunk as the prism began to rotate. It was nothing short of miraculous.

Silenced by the apparition before their eyes, they were mesmerized as the light grew stronger, reflecting rays back onto the bridge. Tweedie felt Pestlemore clutching his arm. ‘What is that?’

Tweedie squinted. He gasped as the shape became clearer. ‘Tis a figure, slumped against the balustrade.’

We use cookies to ensure that we give you the best experience on our website. If you continue to use this site we will assume that you are happy with it.OkPrivacy and cookie policy