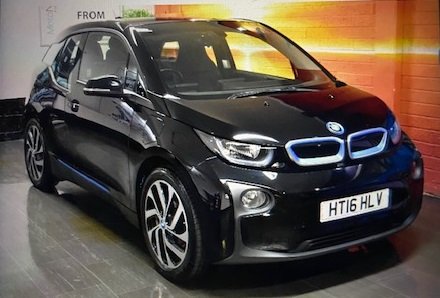 I’ve been saying for a while it would be good to get an electric car, sadly they were out of my price bracket. Then I was away for a couple of days granny duties and returned to find my husband had all but done the deal.

‘It was too good an offer to miss,’ he says.

Day One
We pick up our electric car from 0260 in Crowborough – a four-year-old BMW i3 REX. Actually, it’s a kind of hybrid as it has range extender – a petrol generator which acts a charger if the battery runs down. I joke it will be my mission to never use the range extender as it sort of defeats the purpose but it’s a good safety net.

‘The charger lead is under the bonnet. This is the flap where you plug it in – it’s been fully charged – and here’s the petrol filler. Any problems, just call me.’

As we drive away the battery shows 50 miles capacity and the range extender an additional 80.

‘That’s not as much as I was led to believe,’ I say. ‘I thought the range was supposed to be 85 miles when fully charged?  Perhaps it’s lost a bit standing around…’

We head off for a drive across Ashdown Forest. We want to do a trial charge somewhere as tomorrow we’re driving up to Oxfordshire for my birthday ‘staycation’.

We’d planned for the electric car’s arrival with as much diligence as if it were a new-born baby. After researching the best apps, we downloaded the charging locator Zap-Map to our phones, along with apps for Pod-Point and BP Chargemaster which have quite a few charging stations located locally. We also pre-ordered our own home charger. There are two types, tethered and untethered. The tethered charger has a lead already attached, while with an untethered you purchase the lead separately. We deciding to go for an untethered as this gave us a separate charging lead and meant if we upgraded our car for another model or wanted to offer the charging facility to friends and family we didn’t need to purchase a new unit.

The process of ordering a home changer is a bit long winded. You can get a grant of £350 but that’s often already deducted from the quoted cost. Ours will be £750 – that’s with the grant already deducted but includes installation. You complete three online forms including one where you upload a series of photos to show the cable route. It’s generally an ‘okay’ process if you take your time, although we’ve got a three week wait before installation. Meanwhile we’ll use the home charging cable which plugs into a 3 pin socket. You can’t use an extension cable as it will blow your fuses so you need to be able to park close enough to a house socket where the lead will reach.

Anyway, back to the trial charge:

With our trip to Oxfordshire looming, it was essential to be able to charge our car while ‘out and about’. We consulted Zap-Map and found the nearest charger south was Lewes, but we decided to drive west towards East Grinstead. According to Zap-Map, East Grinstead and Lingfield stations both have Pod-Point chargers so we were all set. We drove into East Grinstead station car park and located the charge point. It was available – hurray. A sign warned us we’d have to pay the car parking charge if we’d be there more than 20 minutes. As we were novices we decided to pay the £5.60 day rate – ouch – but needs must. We opened the bonnet and took out the charger, but the connections were wrong. This was the 3 pin home charger. So where was the one that plugged into the Pod-Point unit?

‘You only get a home charger.’

‘How are we supposed to connect to a charger out and about?’

‘They have leads attached.’

‘Really? I thought they all had leads?’

‘The ones in garages have leads.’

‘The ones on the motorway services do,’ I say, ‘but not the ones anywhere else.’

I google charger leads. You can buy them on Amazon but we don’t have time to wait for a delivery as we’re off in the morning. After a couple of phone calls we locate a charger lead at a BMW garage in Tunbridge Wells. The five-metre cable is £165 including vat.

We drive to Tunbridge Wells. The battery is now down to 20 miles which doesn’t bode well. We buy the lead and consult Zap-Map again.

‘There’s a charge point at the garage in St. John’s,’ I say.

We head there. We read all the instructions. The charge point is owned by Smoov. This is not one of the apps we’ve downloaded. My husband downloads the app, giving them loads of info about us and the car. He enters his debit card details and scans the terminal.

A message pops up on the app, ‘a problem has occurred…’

I repeat the entire process on my phone with my personal details.

‘A problem has occurred…’

It’s very hot, we’ve been out for four hours and we’re both ratty. My husband has had enough. We limp home on the remaining battery, move my husband’s car out of the car port so we can connect the home charger and plug in. The car goes on charge at 4.00 pm. It tells us it will reach 80% by 1.33 am. We leave it on overnight hoping for the best.